As a long-time project partner with Moody Nolan, Jezerinac Geers is proud to support their effort to give back to the community. Here’s the complete story on the Moody Nolan Legacy Project: 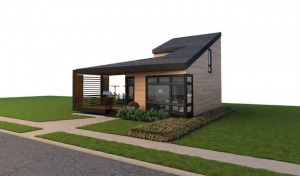 Architecture firm Moody Nolan has announced an initiative designed to provide deserving families with modern, appealing homes in under-served neighborhoods where little investment is being made in single-family residences.

The Legacy Project will provide mortgage-free homes to families who are unable to afford a purchase, but who have the means to maintain them.

“We want to begin a process of giving back to the community in a direct and tangible way – providing a superior example of affordable housing to one deserving family and hopefully establishing a viable template for others to follow,” said Moody Nolan CEO Curtis Moody.

“There are many hard-working families whose incomes may not qualify them for a home mortgage but who are fully capable and committed to maintaining one. After many years of considering how we could best contribute to the community good, this idea seemed past due.”

The first home, designed by Moody Nolan and built by construction partners using community donations and contributed materials and time, will open in Columbus’ Linden neighborhood in February. The Legacy Project House will consist of approximately 700 square feet with three bedrooms, a kitchen, two bathrooms and a family room. An extended outdoor living area and garden will maximize the entire building site and encourage outdoor activity.

“Columbus is a collaborative city and the outpouring of support we have received is evident of that. The Columbus Metropolitan Housing Authority graciously agreed to donate the land and our partners at Southeast Inc. are helping us to choose a deserving family,” said Moody Nolan President Jonathan Moody. “Our goal is to provide a family with a 100 percent move-in ready home by the end of February.”

Planned as an annual gift, Moody Nolan will design and oversee the construction of a home in each of the 12 communities in which it operates. Eventually, Moody Nolan hopes other architectural firms will take up the torch and spread the idea even further.